By K. H. RUFFELL, B.A.
who taught in the school 1937-40 and 1946-79, formerly deputy headmaster and currently editor of The Old Pharosians' Newsletter 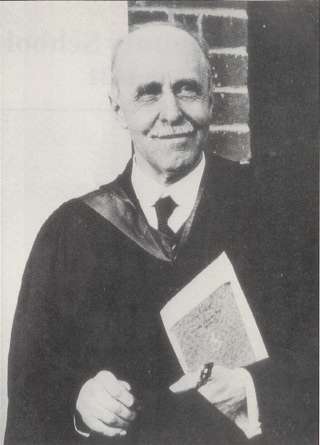 Now eight years into retirement, I have been closely associated with the school and the Old Pharosians since first appointed to teach at the Dover County School in 1937, fifty years ago. I have had contacts with Old Pharosians of every age, most valuably for the present purpose with those still living who were at the school in its early years and can contribute those human stories and impressions that add living interest to factual records stored in dusty volumes.
By kindness first of the Archivist’s Department at Maidstone and then of Folkestone Public Library, the Minutes of Dover Education Committee from 1902 to 1910 have been made available. From 1908 onward the school magazine, The Pharos, is rich in representation of the life of the school. Perhaps editors of today and tomorrow may be encouraged by the idea that they are recording history.
I am well aware that in The Pharos of 1965 at the time of the school’s Diamond Jubilee, Miss O. M. Rookwood wrote about the period 1905 to 1946, and Mr. E. W. Lister, the school’s senior history master in 1965, wrote of the continuing period from 1946 to 1965.
This present account hopes to supplement and in no way replace Miss Rookwood’s history. She taught in the school from 1917 to 1942, followed by some part-time teaching in the immediate post-war years, and her devotion continued as long as she lived. I have had access to individuals and records not used previously, and all writing is characterised by personal interests and contacts. I have too much respect for the memory of Miss Rookwood to hope that I can do more than complement her account.
Among the Old Pharosians who have been most helpful are:

Sincere thanks are expressed to these and many other Old Pharosians; to our historian headmaster for his encouragement; and to my wife for typing the manuscript.
Finally, the Old Pharosians’ president and committee gave their blessing and support to the publication. An anonymous Old Pharosian generously promised to relieve us of financial pressure and Buckland Press has dealt speedily and efficiently with the processes of publication.

Reference may be made to The Silent Social Revolution (1969) by G. A. N. Lowndes (O.U.P) obtainable through Dover Public Library.

Kent County Council was the authority required by the 1902 Education Act to provide and maintain secondary schools in Dover. In the Ladywell premises were the Borough’s Municipal Secondary School, the Pupil Teacher Training Centre and the Technical School of Science and Art. Kent Education Committee decided to take over these establishments unless existing managers desired to retain control. Neighbouring Canterbury ranked as a county borough and continued until 1974 as the local education authority. The managers at Ladywell desired to retain control and Dover Council considered an application to the Board of Education that their secondary schools should be recognised under the 1902 Regulations. Further consideration, inevitably dominated by cost, led to the idea being dropped.
In the academic year 1902-03 the School of Art had 839 pupils at daytime and evening classes. The principal of the Municipal School was required to report on the proportions of scholars entering from public elementary schools and from private schools, and to submit a scheme for the establishment of scholarships for pupils from elementary schools. An H.M. Inspector reported favourably on evening classes in the Municipal School; and the principal agreed with the inspector that practical laboratory work should be given to pupil teachers on Thursday evenings by the science teacher, Mr. George Devenish Thomas, for which he would receive a fee of seven shillings and six pence per evening.
The principal at this time was Mr. W. H. East whose appointment began in 1870 with the foundation of the Technical School. He also did some teaching in Dover College.
During 1902 Mr. Fred Whitehouse, M.A. (Oxon), came to Dover to commence his work in secondary education. He very soon established his imprint that will never be removed.
In September, 1903, the principal of the Municipal School reported that admissions over the first three years of the school’s existence were as follows:-

The Dover County School
in Ladywell and on Priory Hill

Because of the war there was no formal opening of the new buildings. The Annual Prize Distribution was cancelled but parents were invited to an “At Home” early in December. Alas, it had to be abandoned for reasons of war-time economy. Boys helped to dig up the playing fields to grow vegetables, some of the produce going to the hospital.
As male teachers were called away lady teachers took their places. One French boy in the school learned that his father had died fighting in the French army “pour la défense de la France et de l’humanité”. In school a weekly collection was made for Dover prisoners of war.
Mr. Clatworthy and Mr. Darby went on military service, followed by Mr. Baxter and three others. Among the ladies replacing them were Mrs. Clatworthy, a classicist and the legendary Miss O. M. Rookwood.
Letters poured in from serving Old Pharosians in training and in action from many parts of the world. One man training in the Artists Rifles reported that the instructors “unfortunately make no attempt to confine any sentence to words found in the dictionary”. The horror of war and the chivalry of man may be illustrated by the report of one Old Pharosian. A bullet passed through his cheek, smashing his teeth and jaw but his face was rebuilt in a German hospital.
More lady teachers arrived so that young boys were cared for and bigger boys could take their examinations. House matches were played when possible and at other times boys and teachers worked on the land. Everything was liable to interruption when the siren sounded the alarm for air raids.
Mr. Darby, geographer, was engaged in meteorological work in France; Mr. Baxter went to Cranwell; Mr. Tunnell had been in the thick of things at the front but was recalled to be trained for a commission. He returned to France and, alas, the following entry, like so many others, appears in The Pharos:

Looking down the names of boys who were in the school in 1931 there are many who served in the Second World War when Herr Hitler threatened the world with violence, domination and genocide. Some gave their lives and their names are recorded in a book of remembrance that accompanies the memorial to those who fell in the First World War.
Some men who passed through the school have gained this world’s honours in service to the state, the armed forces, the church, in education, commerce, industry and other walks of life. Some names on the registers recur as fathers begat sons and were pleased to get their boys into their school on the hill.
In 1936 Mr. Whitehouse retired and handed the headship to Mr. J. C. Booth who, with steadfast support from Mrs. Booth, saw the school through the war years in Wales, brought it back to Dover and renewed its strength until in 1960 he in his turn retired to be replaced by Dr. Michael Hinton. A wind of change swept through the school for eight years, to be consolidated and advanced from 1968 to the present time by Mr. R. C. Colman, with whom it is a pleasure to work.
Each of the four headmasters received his education at a grammar school and was an Oxbridge historian. Each has drawn strength from Christian belief and practice. The present headmaster likes to speak of the family of the school’s succeeding generations. He has chosen to regard as Old Pharosians all who have ever passed through the school. Of these, some six hundred choose to belong to the Old Pharosians’ Association whose main purpose is to sustain and preserve the school that served them so well.
Let there be light, forty years on and into the future beyond our time and vision. 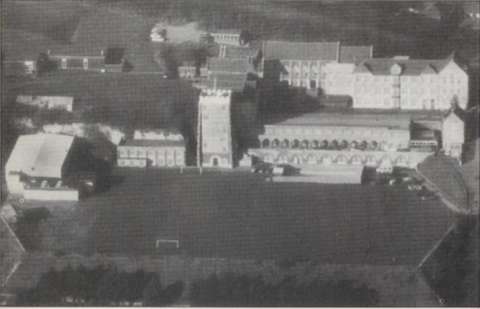 The School today (1987), though the sports hall on the left belongs to Astor Secondary School.

Reference may be made to the bound volumes 3, 4 and 5 of The Pharos and the Diamond Jubilee issue of 1965-66 kept at school.