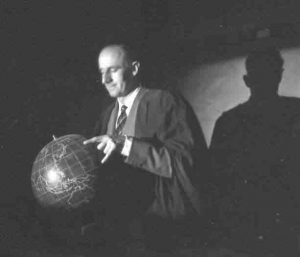 NEWS OF THE ASSOCIATION

NEWS OF THE SCHOOL

“All the world’s a stage,
And men and women merely players
They have their exits and their entrances;
And one man in his time plays many parts.”
(William Shakespeare: As you like it.)

As many of you will know by now, Ken Ruffell – whose connection with the school spanned more than 60 years – died in February. He was 89. News of his illness and subsequent death brought many tributes from former pupils who remembered him with respect and affection.

A Memorial Service for Ken is to be held at the school on Saturday 19 July at 10.30 a.m. so that all those people who were touched by Ken’s life in this area have a chance to celebrate his memory. We are delighted that Barbara and Christine will be joining us for this service.

In order to make sure there is sufficient accommodation for all those who want to attend, you are asked to write to our secretary, Phil Harding, for a ticket, as soon as possible. Please enclose a stamped self-addressed envelope. Coffee will be served after the service.

A service of thanksgiving for his life was held at the Methodist Church at Baildon in West Yorkshire, where Ken and his wife Barbara moved in 1998 to be nearer their daughter Christine and family.

Leading the tributes at the service, and referring to the verse from Shakespeare printed above, Christine recalled that her father was certainly a man who played many parts … a scholar, a sportsman, a Christian, a churchman, an actor, a family man, a friend, and a schoolmaster of a noble kind.

Ken was born in 1914 in Teddington, the eldest of 4 children. He witnessed poverty on the streets of the London suburbs where he grew up and perhaps his early experiences of childhood, overshadowed by the First World War, shaped his lifelong commitment to supporting causes that addressed poverty whether in this country or overseas, and his abhorrence of war.

After showing promise at primary school, he won a scholarship to attend Hampton Grammar School where he was able to develop not only his academic skills, but also his sporting prowess. He gained a place at London University to study Geography in 1932. Whilst in London as a student he met many other students on exchange visits from other European countries and forged some European friendships that survived even through the dark days of the Second World War. A natural linguist, he could speak French fluently and learned both German and Italian in later life. His grandchildren were always amused by their grandfather’s delight at being able to air one of his European languages with some of the many visitors that he met around the streets and monuments of Dover.

On leaving university with a teaching qualification as well as a degree, Ken found himself looking for work during the 1930s slump when so many other people were out of work and seeking jobs. Christine said: “I think Dad never quite could believe the stroke of good fortune that saw him offered the post of junior geography master at the then Dover County School in 1937 from a field of candidates that numbered 200. This was the start of a beautiful relationship with the school, with generations of its students, and with the town of Dover, which became his home. Dad took up what was to be the defining role of his life: that of schoolmaster and teacher.”

Soon after he started teaching, the school was evacuated to Ebbw Vale, and, since his death, Ken’s family have been contacted by two men who remember him fondly from their days as pupils with him in 1938 in Ebbw Vale.

He did not stay long in Ebbw Vale and he became a Captain in the Royal Tank Regiment and was trained as a wireless officer. After several postings within the British Isles he accompanied his regiment to India, developing a lifelong love of sunshine and curry, and as adjutant he was able to travel up into the Himalayas and see at first hand some of the wonderful geographic features that he had previously only read about. Ken’s horror of warfare made him a lifelong committed supporter of European unification in all its forms and of the United Nations Associations.

At the end of the war, Ken returned to his teaching career at Dover Boys Grammar School, progressing to be Head of Geography, Head of Sports, and by the time he retired, Deputy Head of the School. He served under four headteachers and was a loyal supporter and friend to them all, admiring each of them for their different qualities.

Ken loved out of school activities and was much involved with dramatic productions, producing the musical Oliver! in his final year before retirement.

Christine recalls that Christmas was always his favourite time of year. “For someone who was usually very reserved in the expression of emotions, Dad wallowed in the wonder of Christmas and loved to work with the music master to plan and rehearse carols and readings for the school Christmas service with his students. Dad had a strong sense of wanting to share with the young men in his care his own personal commitment to English culture, the arts, and Christian traditions, and Christmas provided a terrific vehicle for the transmission of these values.”

An active member and official at St Andrew’s Parish Church, Buckland, he transferred to St Mary’s Church when he and Barbara moved to live at The Gateway. He was keen on ecumenical activities and was active in the Council of Churches, inter-church discussion groups and the Christian Aid Committee, for which he acted as treasurer for many years.

A keen sportsman he enjoyed athletics when he was young, particularly the half-mile, and he also played tennis and rugby. As Head of Games he spent his Saturday mornings on the games fields at the school and continued to referee football matches until well into later life. His most enduring sporting love, however, was cricket, and he played for the Dover Cosmopolitan Cricket Club as wicket keeper well into his seventies.

Christine started the tribute to her father with a Shakespearean quotation because Ken loved the language of Shakespeare. One of the founder members of the Dover Players, from 1947 to 1972 he was involved either in acting, direction, or stage management for at least two productions a year. His finest hour was to play Hamlet in an open-air production at Dover Castle.

Ken and Barbara were married in 1949.

When Ken officially retired at the age of 65 he taught for a while at Folkestone Girls Grammar School as well as continuing to fill in for absent teachers at our school from time to time. He took on the editorship of this newsletter and through this activity kept in correspondence with past pupils around the world. He was always delighted to hear of the success of all his pupils, but what delighted him most was to reflect on those he had managed to help get into Oxford to read geography.

Ken gave his final formal lesson as a teacher at our school on his 80th birthday at Dover Boys Grammar School, and he retired as editor of this newsletter in 1996.

Just before moving to Baildon, Ken and Barbara visited the school to unveil the plaque, in the hall, commemorating his 60 years’ association with the school.

Among those who attended the thanksgiving service at Baildon was Richard Gretton (1965-73) who was invited to pay tribute to him at the service. Richard said Ken would be especially pleased that tributes had come from all over the world.

Describing Ken as a man whose positive, Christian example has touched so many hearts, Richard said he was just a small choirboy at St Andrew’s Church in Dover when he first knew Ken. “He seemed so tall and impressive and an early memory is of him spreading himself across the Churchwarden’s pew, particularly during one of the Rector’s longer sermons with his eyes tightly closed Â… I am sure he was concentrating.

“Then, as a schoolboy going to the grammar school at 11, his was a friendly face amongst a sea of strangers. Throughout my time there he exuded a love for his subject, the sport about which he was so passionate, the music of the school and the boys in his care – I’m very proud that he too