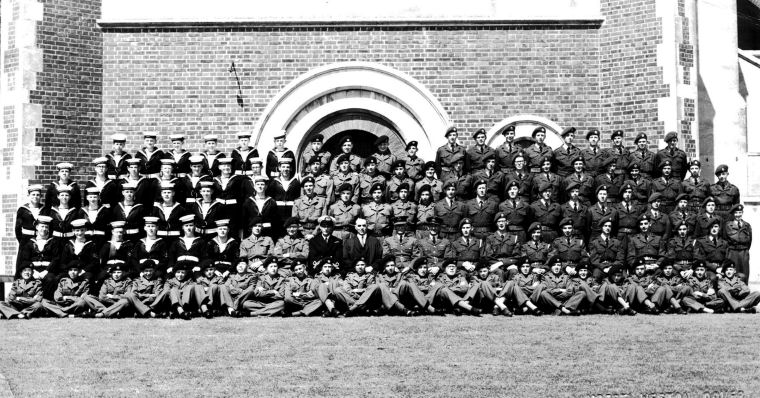 CCF picture taken at the foot of the tower in spring 1958.

Unfortunately both photos look slightly damaged, but fortunately in different places, so I am currently marrying the two together to create one, almost undamaged image.

Latest news, 12 August 2008, Chris Wilson says:- “I was looking at the photos on the School Website and I came across the photo of the School CCF for 1958. There was a note that it was a composite photo as the copies available were damaged. I have attached a copy of my complete photo of the occasion which I hope will be of some help. I am sitting sixth from the right in the second row and it was July 1958 as I was about to leave and join the Royal Navy. The RAF did not want me as a pilot so I became a Fleet Air Arm pilot instead – much better choice! Just got the latest Old Pharosian Newsletter – not too impressed about the intended move to Whitfield but, as they say, we shall see!”

The above photo is now the undamaged one, but I am still using the slightly damaged one for the large one as the clarity of the images seems to be a little clearer.