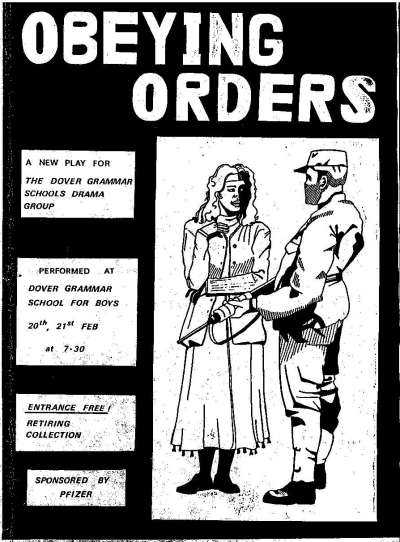 Obeying Orders
Obeying Orders has been entered for the 1992 Lloyds Bank Young Theatre Challenge. The following is an extract from the Royal National Theatre Press Release:

“THE LLOYDS BANK THEATRE CHALLENGE- NOW IN ITS FOURTH YEAR. OFFERS YOUNG PEOPLE BETWEEN THE AGES OF 11 AND 16 THE OPPORTUNITY OF A LIFETIME- TO PERFORM ON THE WORLD FAMOUS OLIVIER STAGE AT THE ROYAL NATIONAL THEATRE.

ANY GROUP OF BETWEEN 3 AND 30 MEMBERS WITH A PRODUCTION LASTING FROM 15 TO 45 MINUTES CAN ENTER THE CHALLENGE. IT CAN BE A SPECIALLY CREATED PIECE 0F WORK OR A PIECE ALREADY PUBLISHED. ENTRIES FOR THE 1991 CHALLENGE INCLUDED EXTRACTS FROM CLASSICAL WORKS AS WELL AS MODERN SCRIPTS AND IMPROVISED DRAMA.

ROYAL NATIONAL THEATRE ASSESSORS INCLUDING DIRECTORS, PLAYWRIGHTS, ACTORS, PRODUCERS- ARE TRAVELLING AROUND GREAT BRITAIN IN ORDER TO WATCH SELECTED PRODUCTIONS FROM OVER 200 ENTRIES FOR THE 1992 CHALLENGE. THEY WILL GIVE HELP AND ADVICE TO ALL THE COMPANIES AND WILL FOLLOW THE DEVELOPMENT OF THE PRODUCTIONS CHOSEN FOR THE SHOWCASE ON THE OLIVIER STAGE IN JULY. 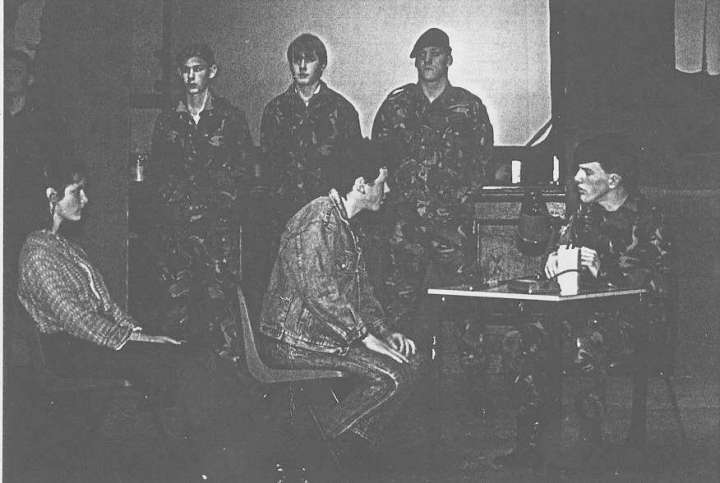 The Company In-Order of appearance,

Chorus speakers played by members of the company.

Thanks to Sarah Taylor and Dover Grammar School for Girls, the Combined Cadet Force for the loan of uniforms and weapons, Mr Richard Davies for musical advice, Mr Peter Chatfield, Mr Peter Brook.

The production has been generously sponsored by, PFIZER LTD

There will be a retiring collection after the performance.

Directors Notes
A play is rarely only one thing: it may take a certain subject as its basic working material, or it may attempt to follow a particular narrative line, but seldom is the texture simple or the narrative line straightforward. Indeed, when this is the case the drama is likely to be no more than soap opera. Thu, this play began an an exploration of some ideas and situations thrown up by recent political events in the old communist block.

But the plain political narrative proved unfertile and interesting. particularly to a young theatre group. During the writing other textures and other narratives intruded into the play. Dance and song became part of the structure and the story insisted on becoming both more local and universal, local because the abstract political arguments were pushed into the background and the relationships between a few simply sketched characters highlighted; universal because the play grew to be as much about certain basic human values and experiences, (loyalty, fear, courage, the confusion of adolescence, masculine and feminine ideas of strength) as it was about political events which most of us have only ever experienced vicariously.

I have been privileged to work with such an experienced and dedicated group of young people, who have responded to the challenge of creating an original and contemporary play. In all areas they have brought imagination, energy and commitment, whether actors, dancers, musicians, designers, stage crew, lighting and sound effects staff etc. It takes many people to create a work of theatre, and the performers seen by the audience are only a part of the whole company. Although not directly involved in the writing of the text, members of the company have contributed to the shape of the material through improvisation and discussion. The play was not written as a single piece, but evolved over a period of several months, during which prototype scenes were read with the cast. That which they approved I was heartened by and kept, material about which they had doubt, was generally rejected in the end or rewritten, In that respect the play can be said to have been written both with and for the Dover Grammar School Drama Group. 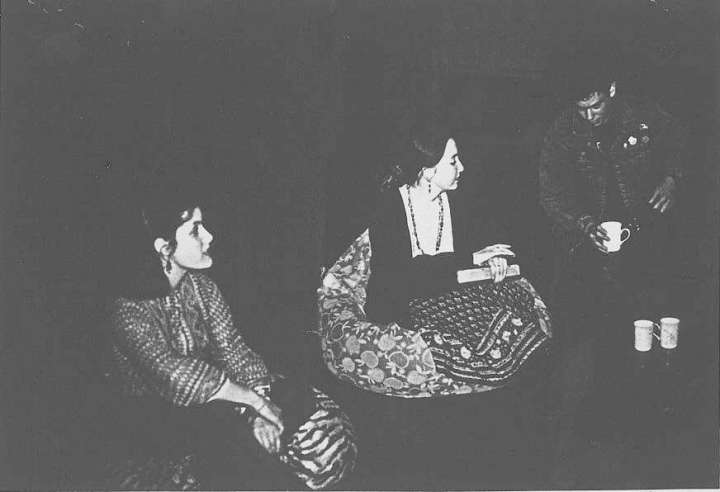