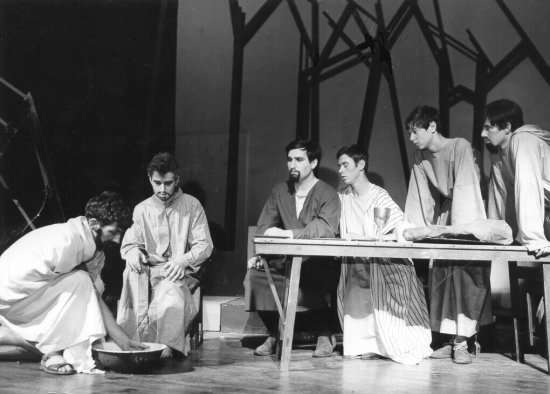 “Just thought I’d send you this picture from around 1967 when we performed Gordon Honeycomb’s The Redemption. John Harris was Jesus and is seen washing Peters feet (played by myself). The incomparable John Evans, as Judas, sits to the right of me followed by Brody, someone whose name I dont recall and then, I believe “Sansome”. We were fortunate enough to have the author; a well known news broadcaster visit the school and see the play. Although my talents in acting were extremely limited, he was complimentary and mentioned that he had played the role of Peter in the first enactment of the play. Ken Pickering was an inspiration to us all in the production.
Hope this is of some use,
Regards,
Robert Banning.” (24th April 2003)

From Martyn Durbidge:- “Going back to the website photo from The Redemption (1967), the person Robert Banning can’t remember the name of is, I think, me! I’ll need to check my photos (dunno where they are though). It certainly looks like me and I’m sure I’ve got that photo. The only thing I don’t understand is why I would be in it. I was a first year pupil and not a main character. Perhaps they needed one more and I was hanging around. Anyway, I’m pretty sure. How extraordinary!

I remember during one of the performances (sorry if you’re getting a lot of reminiscences) the Messenger was called for (“Hark, a messenger approaches!”). Unfortunately the Messenger was playing cards in the dressing room and was oblivious both to the time and how the origins of the modern church were panning out. I’d been to so many rehearsals I knew the Messenger’s speech backwards, and when it became apparent that something was wrong all I had to do was push my way out of the ‘crowd’ and pretend I was the Messenger. Surely I could do it? I had a mental picture of the older boys slapping me on the back afterwards for saving the day, congratulations from the Headmaster, my name in the Distinction Book, a lifelong career as star of stage and screen…and of the real Messenger arriving at the same time and of there being the wrong sort of ‘scene’ and me looking a prat. Was it the Right thing to do? Should I or shouldn’t I?

I didn’t. The day wasn’t saved and for all these years I’ve lived with the regret of not having had the courage to step forward. Silly, isn’t it?”