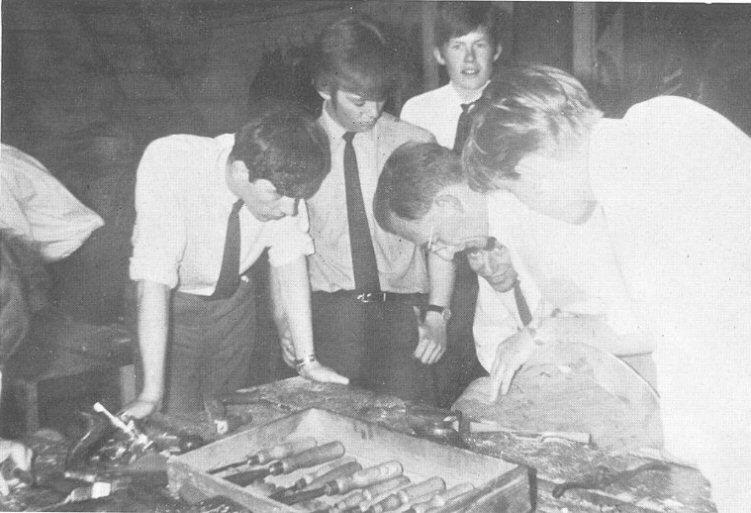 In the Woodwork Shop by K R Walton (5T).

The Master shown is Mr E C Large, but who are the others in this picture?

“Just seen the 1966 woodwork shop photo. I am standing at the back looking straight at the camera”

“”Ollie” Beak is leaning over the bench, I can’t remember the good looking one for now but he entertained 5T with his guitar, the name will come to me. Yes that is Michael now Dr Miller and the one with his back to the camera is me. Richard Swain. Ah I remember it well. The piece that Ernie, Mr Large, was working on was a guitar that I made or nearly made in the work shop and until last year, 2004 resided in my garage. Keith “Wally” Walton left school to join General Electric and gained notoriety by making a miniature tool chest which he presented to the queen mother, bless em.”

“Ollie Beak was actually Hoyle. He had a rather unfortunate accident I think in 1962 when he had both legs broken during a rugby match. I had the dubious pleasure of tackling Dr Hinton.

If anyone should have any further photos or know any details, please contact ]]>