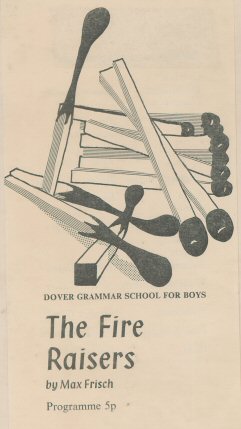 CAST in order of appearance

The play opened in Zurich as “Bicdermann und die Brandstifter” and was first produced in England in 1961 at the Royal Court Theatre.

Like Brecht, Frisch employs devices to alienate his audience, so that they may observe not merely WHAT happens but WHY it happens.

Yet in judging Biedermann and those whom he represents we should remember – as the chorus puts it – that ‘he who sees from without…. more quickly perceives the peril that threatens.’ Frisch does not allow our individual conscience to escape judgement either.

Everyone must answer for himself Biedermann’s crucial question: ‘What would you have done in my place, damn it all, and when?’